At Pogo Web Designs we already have a security company dominating local (Gold Coast) search engine results. CCTV and alarm security company TES Gold Coast are top ten for a bunch of terms, and number one for many of them. These include such terms as:

That’s an enviable position TES are in. Clearly, if someone is looking for security systems on the Gold Coast, they’re going to come across TES. 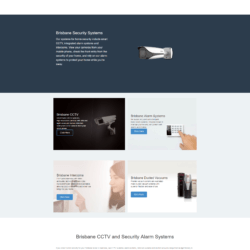 What about Brisbane though? That’s a bigger and more lucrative market. Leading security system installers ASA Brisbane Alarms Systems have always had a strong foothold in the Brisbane market. The phone has always run week in and week our for CCTV system installation and alarm system installation. Bob Pearce gives direct and complete quotes over the phone, follows up with quality installs, and after-sales service.

Bob did his own website and it’s done really well…until recently. Suddenly it tanked. And the phone stopped ringing. No more CCTV and alarms systems quotes came from Google search engine referrals.

Our analysis of the crisis showed that ASA’s website was poised on a knife-edge, even as it ranked top 10 consistently (for well over a decade!).

Late in 2017 ASA’s website, brisbanesecurityalarmsystems.com, lost a bunch of inbound links. It didn’t have many and when it two or three websites folded, he went under with them. Google uses inbound links as a way of assessing your website’s importance. If people are linking to you then you must be important. ASA had about 20-odd links from 5 or 6 domains. One domain got taken over by a company that used it as a spam site. Another two disappeared. Another went… By mid-January 2018 ASA was left with just 5 inbound links.

Let’s discuss good links and bad links. It’s a simple idea. If a link comes from a reputable source, let’s say pogo, then that is a good link. If it comes from a Russian spam site then that’s a bad link. ASA found themselves, quite unknowingly, with only 5 inbound links. And three of them were bad.

Clearly, the most important work now is to get brisbanesecurityalarmsystems.com some inbound links. One of the two remaining good links is from Pogo’s security camera page. That We need more like that. Without giving too much away about our sources and techniques, let’s just say we’ve got plenty of ammunition in this fight and ASA’s Brisbane Security Alarm Systems website is already on the way to being rehabilitated.

Apart from the inbound links, the primary weapon for ASA’s website, we have other work to do also. ASA need to be part of the internet and community. All companies should. They should post updates on their website, Facebook, Google+ etc. It’s a healthy thing to any company to be part of its community, whether physical or virtual. Google respects that. Also, open exchange of ideas and dialogue will lead to new clients, so there are many reasons for being in on the conversation.

15 SEO Ranking Factors You Should Care About in 2022